Arsenal booked their place in the FA Cup quarterfinals with a win at Portsmouth, in which Matteo Guendouzi picked up a rather odd booking of his own...

A yellow card for sarcasm? 🤔

Mike Dean appears to caution Matteo Guendouzi for placing the ball down in an exaggerated way. pic.twitter.com/Xf3NFHUmsS

The Gunners kept their hopes of a record-extending 14th FA Cup triumph alive with a 2-0 win at Fratton Park on Monday (stream the replay on ESPN+ in the U.S.).

Guendouzi, who has been out of favour in recent weeks, returned to the starting lineup only to receive a yellow card in the opening stages in slightly embarrassing fashion.

Attempting a quick free kick, the French midfielder expressed his umbrage at being stopped in his tracks and told to retake the set piece by placing the ball down in an exaggerated, sarcastic manner.

The display didn't sit well with referee Mike Dean (for it was he), who promptly booked Guendouzi for dissent in the 35th minute.

The famously theatrical Dean, cautioning a player for exaggerated gesticulation? Whatever next?

Did Werner unfollow RB Leipzig because of Liverpool taunts? 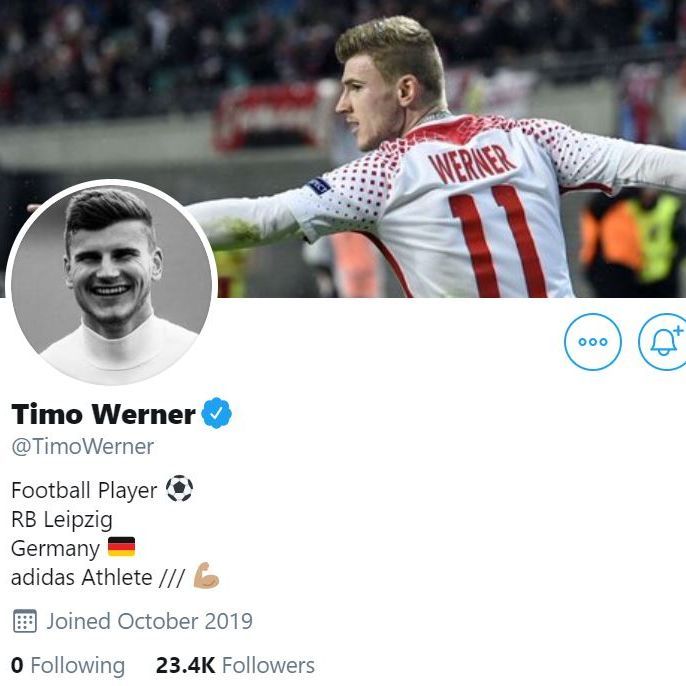 The transfer window may be closed, but that hasn't stopped rumours swirling around that Timo Werner is high on Liverpool's summer shopping list.

That speculation was fed recently when Werner unfollowed his current club, RB Leipzig, on Twitter after the German side mocked Liverpool's first league defeat of the season.

After Jurgen Klopp's side were beaten by Watford at the weekend, Leipzig responded to their full-time score update with a GIF of Werner glancing at his phone with a look of disbelief.

A Liverpool fan account then followed up by claiming Leipzig's tweet was the "weirdest transfer announcement" they'd ever seen, leading the German side to post another reaction GIF of Werner, this time slapping his forehead.

The upshot was that Werner quickly unfollowed Leipzig, though it's perhaps also worth noting that the 23-year-old also culled the few other accounts he followed on his personal account at the same time.

The precise reason for Werner's purge as yet unclear, but there's a chance he could be clearing house ahead of a big announcement and/or a fresh start somewhere new.

Bring on the summer transfer window ...

Will be back stronger 😂 🥊 ko pic.twitter.com/ppQbu58Sw9

With both players currently coming back from injury, Leicester City duo Jamie Vardy and Wilfred Ndidi took the notion of "fighting for fitness" extremely literally in a video shared this week.

Vardy and Ndidi are on the cusp of returning to first-team action and proved so by staging an impromptu boxing bout at the Foxes' training centre.

The pair were seen sparring in the gym ahead of Wednesday night's FA Cup tie against Birmingham City, which Ndidi was reportedly set to feature in. However, that was before he was floored by a stiff Vardy punch to the gut!

Palmeiras have unveiled a set of new shirts that pay homage to the Brazilian side's historic roots.

The sport club was founded in the early 20th century by a community of Italian immigrants living and working in the city of Sao Paulo.

As a nod to their origins, both Palmeiras' new home and away shirts feature motifs that are based on illustrations on the cover of the handbook given to those migrants in 1886 upon their arrival in Brazil.

Now one of the biggest football clubs in Brazil, Palmeiras boast millions of supporters around the world, many of whom are of Italian ancestry.

"A shirt with history," the accompanying launch blurb reads. "Originated from the dream of an immigrant colony and cultivated on the factory floor, which became the passion of 16 million people.

"We planted the seed that arrived here by ship. We embrace everyone, from north to south of Brazil. Our story has no face, no accent ... but it has a shirt!"