Ajax are the latest club to release their 2021-22 third kit in a busy week that has seen a deluge of new auxiliary strips dropping all around Europe. However, rather than delving into the past or revamping a design of old, the Eredivisie club have taken the opportunity to pay homage to one of their key musical inspirations.

The shirt is a tribute to the late, great reggae legend Bob Marley, whose classic anthem "Three Little Birds" can regularly be heard echoing around the terraces of the Johan Cruyff Arena on matchday.

It all began in fairly unlikely circumstances during the summer of 2008 when Ajax travelled to Wales to face Cardiff City in a preseason friendly at Ninian Park.

The Dutch fans were asked to remain in the stands after the final whistle to help ease congestion outside, during which time they were entertained by the stadium DJ. Three Little Birds was one of the songs played. It was instantly embraced and is still sung to this very day.

Indeed, Ajax have adopted the reggae anthem as an unofficial club song and will now take to the field with three little birds on their jerseys -- etched in the famous red, green and gold colours associated with Marley's Rastafarian religion.

Rise up this mornin', smile with the rising sun.

Introducing our new 21/22 third jersey, inspired by our collective love for @BobMarley and his Three Little Birds. pic.twitter.com/YiPUS7AR19

As well as his music, Marley was also known to be a passionate lover of the game and his Wailers 5-a-side team even took on FC Nantes -- who were reigning Ligue 1 champions at the time -- in a casual kickaround in the early 1980s, before taking to the stage in the French city later that night.

"I am beyond touched that Ajax has taken Three Little Birds and made it their anthem," said Marley's daughter, Cedella. "Stories like this warm my heart and show how impactful songs like Three Little Birds can be. Soccer was everything to my father... and to use his words: 'football is freedom.'"

Ajax's new third kit forms part of a larger Marley collection which also includes a tracksuit, sweater, t-shirt and a pair of limited edition Samba sneakers, complete with red, green and gold stripes, as well as the club crest on the tongue. 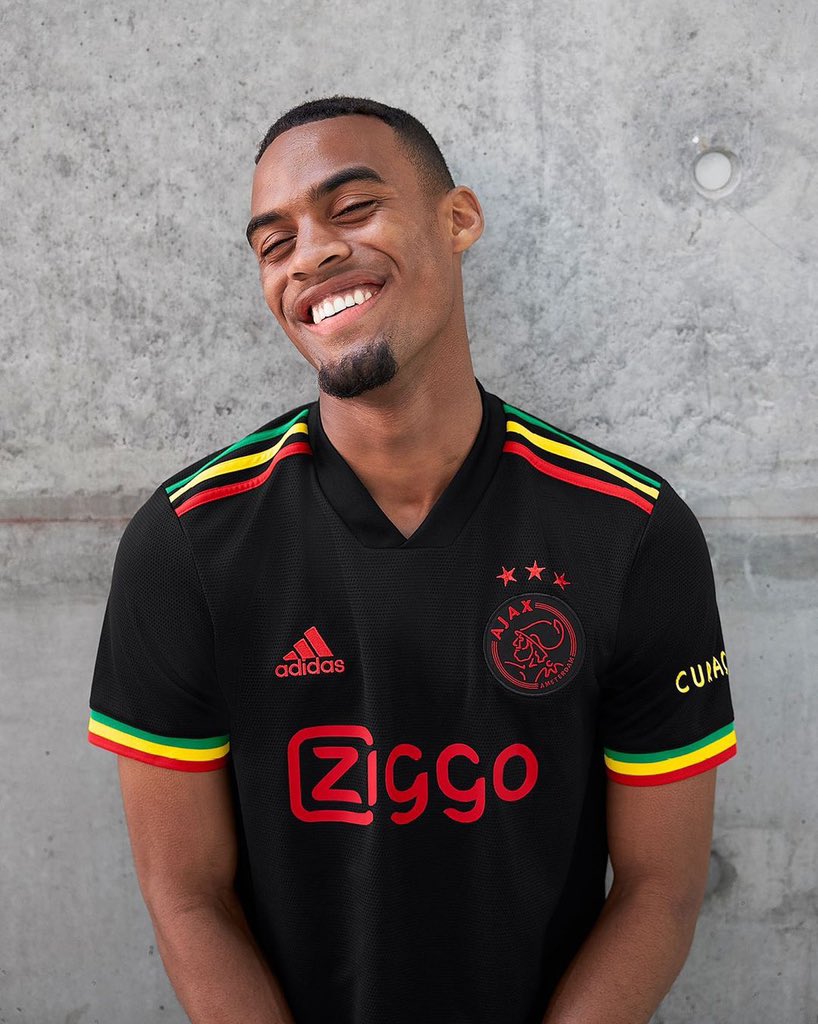 This isn't the first time we've seen Marley's image gracing a football shirt either, with Irish club Bohemians launching their own limited edition jersey for the 2018-19 season.

The shirt was intended as a tribute to the Jamaican legend, who staged his last ever open-air concert at Boh's Dalymount Park ground in Dublin in 1980.

It's in tribute to Bob Marley after his final outdoor concert took place at their home ground 🇯🇲 pic.twitter.com/tdl9KKhffy

However, the League of Ireland side were quickly forced to axe the design after running afoul of image rights laws, despite Marley's son Ky-Mani branding it the "dopest" football shirt he'd ever seen.

Football kits with musical tie-ins have proven consistently popular, with one of the best examples emanating from MLS as Seattle Sounders paid tribute to one of the city's most famous sons, James "Jimi" Marshall Hendrix, with the release of a new kit for the new Major League Soccer season. 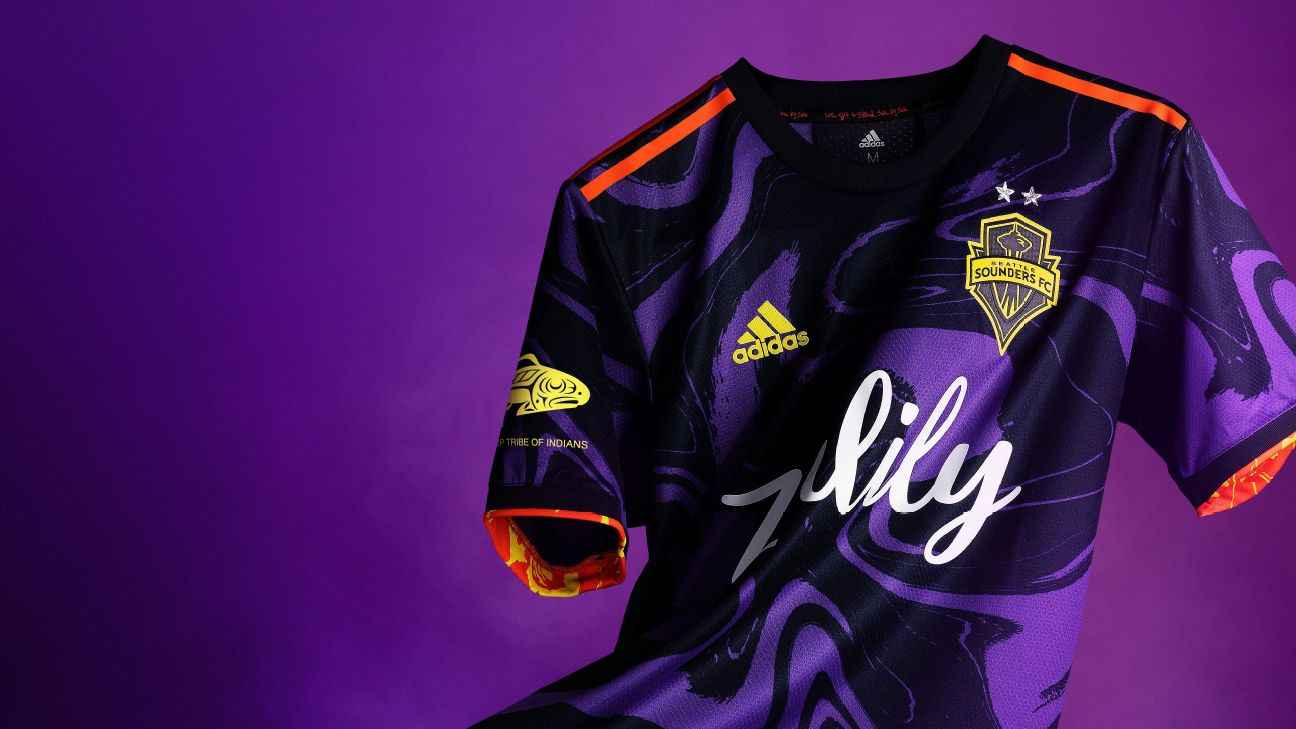 The Sounders' psychedelic 2021-22 away shirt celebrates the life and career of the 1960s rock legend, whose band The Jimi Hendrix Experience was inducted into the Rock and Roll Hall of Fame in 1992.

"Seattle was and always will be Jimi's home. The Sounders are Seattle's own, as well," said Janie Hendrix, president & CEO of Experience Hendrix. "Collaborating with the Sounders to create a jersey is our way of playing for the home team. Jimi was all about honoring the place you come from. This venture allows us to give back to the community he loved. That's something I think would make Jimi proud."

Sounders star Nicolas Lodeiro helped launch the new Adidas uniform, which has been officially dubbed "The Jimi Hendrix Kit" by the club.

The jersey conjures images of the electric guitar great in his pomp with a purple haze effect all over, trimmed with bright flashes of orange and yellow -- accents as bold as love. 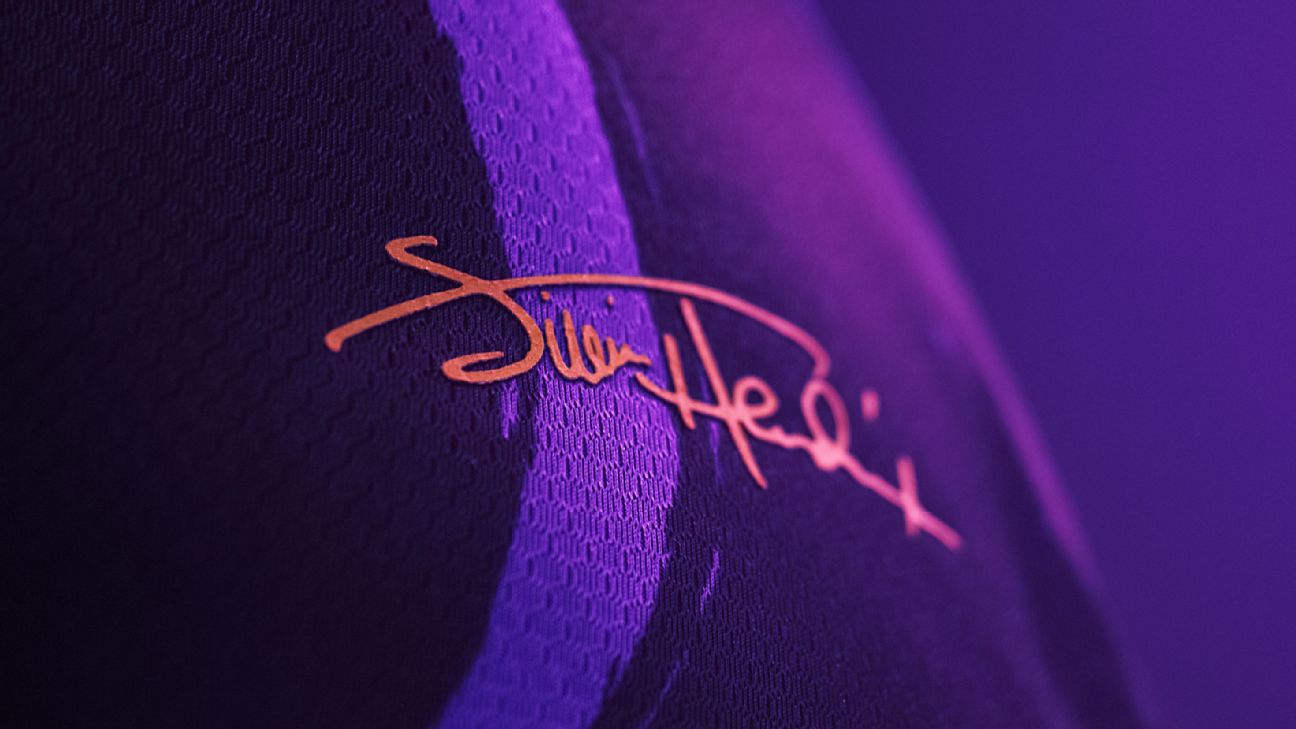 Hendrix's signature has also been added to the bottom-left corner of the jersey while the inner neck features a tape graphic of hand-written lyrics from the song "Straight Ahead," which was included on posthumous 1997 album "First Rays of the New Rising Sun." 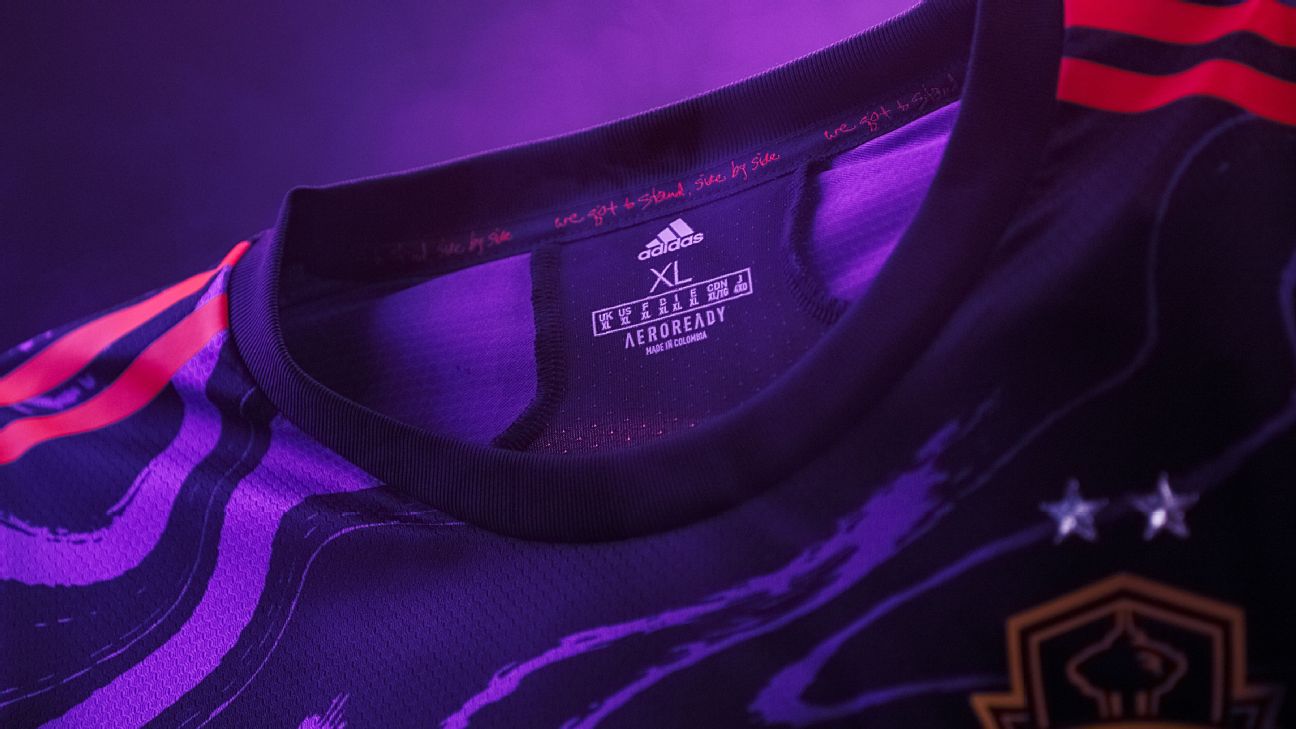 This is no castle made of sand either, with the Sounders' Jimi Hendrix kit also placing a strong emphasis on promoting and supporting local community causes. Proceeds from the first 30 days of sales will be donated to five non-profit organisations, all of which are geared toward advocating youth sport and/or art and music.

What's more, the right sleeve of the shirt also features the salmon logo of the Puyallup Tribe, who still serve as first nation stewards of the land throughout the Puget Sound in Washington State and have recently signed a charitable partnership deal with the club. 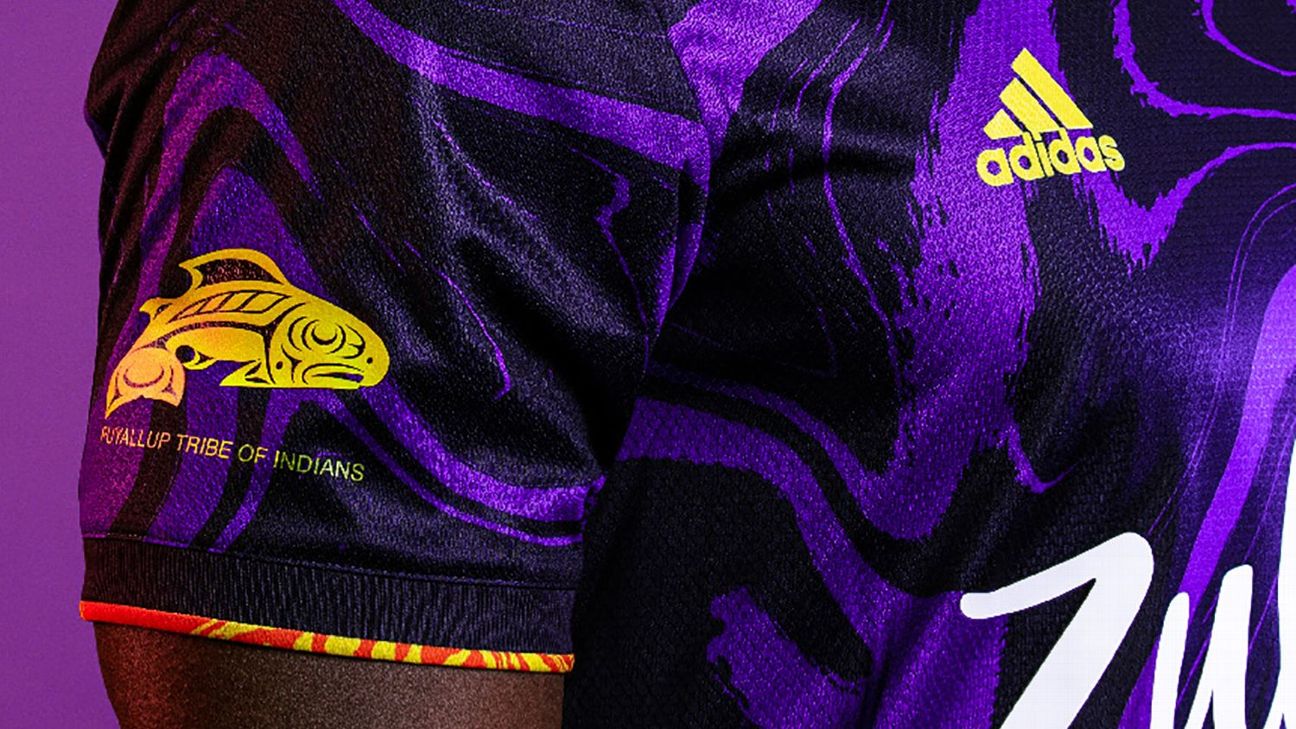 Elsewhere, Dublin-based club Bohemians were at it again as Irish post-punk band Fontaines DC sponsored their new away kit. The kit, which features the band's name across the midriff, will help raise funds to support a homelessness charity with 15% of proceeds being donated to Focus Ireland.

We're extremely proud to be a part of the new Bohs kit in conjunction with Focus Ireland as they are two organisations that we hold very close to our hearts. @bfcdublin @FocusIreland https://t.co/X8GITXdSGa pic.twitter.com/6GptJrKaTF

Last season, Bohemians collaborated with human rights charity Amnesty International to create an away shirt that proudly expressed support for refugees fleeing war around the world.

"Bohs are an organisation that really care about the community," said Fontaines DC drummer Tom Coll. "Having a Dublin football team having 'Refugees Welcome' be the biggest thing on their shirt, that's amazing."

In the recent past, we've even seen huge clubs like Paris Saint-Germain buddying up with rock royalty to produce special one-off shirts.

Indeed, the Parisians joined forces with the Rolling Stones to produce a whole range of merchandise, including replica shirts, apparel, skateboards and even crash helmets.

OFFICIAL: PSG have launched their "unique collaboration" with the Rolling Stones. #PSGNoFilter pic.twitter.com/Dh9mySO5RP

After scoring a number of hits in the early 1990s, Scottish pop band Wet Wet Wet decided to invest some of their earnings in their hometown club, Clydebank, by taking over as shirt sponsor.

"Wet Wet Wet arguably started the whole bands sponsoring football teams by pumping some of their pre-Love Is All Around royalties into their hometown team in 1993." pic.twitter.com/QLAKRyhHqh

DJ and Brighton & Hove Albion fan Fatboy Slim had his record label Skint sponsor the shirts of his beloved hometown club for a period in the early 2000s.

As unlikely as it may seem, The Prodigy saw fit to sponsor an under-13s team in 2012 when a dad of one of the Eastleigh Juniors FC players wrote a letter to band member Liam Howlett.