We've all watched and wondered. We've all felt hard done by. We've all cursed the sliver of fortune and happenstance that turns victory into defeat. That's what prompted ESPN and the team led by Dr. Thomas Curran, at the London School of Economics, to compile the Luck Index, which returns for a second season.

The 2018 version found that luck had a profound effect on the top of the table. It gave Liverpool, the unluckiest side, an additional 12 points, which would have catapulted them from fourth to second. It also found that the gods were harsh on Arsene Wenger's final Arsenal side, who lost eight points due to misfortune, while being very kind to Jose Mourinho's Manchester United, gifting them six points: take them away and rather than finishing second, they would have been fourth.

- It's official: Man United were lucky all season long

We know that luck does not necessarily even out; not over a season, not over several seasons, probably not even over a lifetime. (Just ask Forrest Gump.) But as a predictor of trends for the following campaign, the Luck Index didn't do too badly.

Liverpool ended up as runner-up to Manchester City, pushing them hard all season and winning the Champions League and, according to the Luck Index, it was fully deserved. United crumbled, changed managers mid-stream and finished sixth despite being one of the luckier teams in the league once again. Arsenal, under Unai Emery, were one point off the top four -- actually, right where they should have been -- and reached the Europa League final.

This season's results are similarly intriguing:

It feels weird to say, but champions Man City were unlucky

Manchester City were unlucky this year and lucky the year before, suggesting that the 2018-19 version should have gained 101 points (misfortune cost them three points) and finished four points clear of Liverpool, while the centurions from 2017-18 were actually fortunate and gained an extra three points.

Man United were even worse than it looked

Ole Gunnar Solskjaer got a lot of credit -- and a full-time job -- for rescuing United from the disaster that was the first four months of Jose Mourinho's third season but when you break down the numbers, they were fortunate to finish sixth. Both managers at Old Trafford had good fortune in 2018-19 but when you break down the myriad injustices suffered by Everton, who were the unluckiest team in the Premier League last year according to the Luck Index, United should have finished seventh and out of the European places, with Everton finishing sixth on 62 points, ahead of United on goal difference. It's no wonder both teams have been busy making signings this summer.

Look away if you're a Fulham fan...

If Fulham feel hard done by their 19th-place finish and relegation last season, the Luck Index would tend to agree. It says they should have had an additional five points last season, which would have been enough to leapfrog Cardiff and Brighton in the adjusted table. (Both of those sides were extraordinarily fortunate to get an extra seven and eight points respectively through good fortune.) Viewed through that lens, Brighton's decision to part ways with manager Chris Hughton despite staying up makes a bit more sense.

Luck also played a massive part in the race of the Golden Boot, which was shared by Mohamed Salah, Sadio Mane and Pierre-Emerick Aubameyang, each scoring 22 goals. Apply the Luck Index adjustments and the two Liverpool strikers lose four goals each, while Aubameyang loses a whopping eight. (The Arsenal striker paid a price for deflected goals, incorrectly awarded goals and converting incorrectly awarded penalties).

Check out the table: 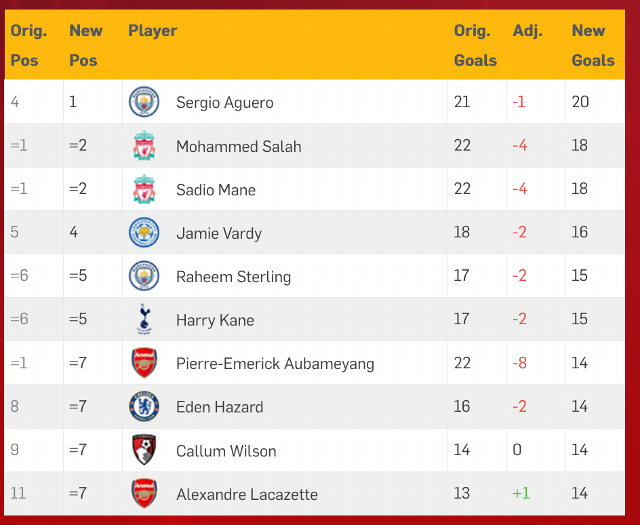 All of this means we would have had a different top scorer last season: Sergio Aguero, whom the Luck Index stripped of only one goal, leaving him on 20 (rather than the 21 he had in reality).

Incidentally, there might be something to the old cliché whereby strikers make their own luck: each of the top eight goal scorers in the Premier League had goals taken away by the Luck Index.

This may be the point at which you wonder how on earth Dr. Curran and his team determine whether an incident was lucky/unlucky and what impact it might have had on a result. In this year's Luck Index, four types of incidents were considered: red-card incidents (both for players that should not have been sent off and players that should have been), penalty incidents (again, both those incorrectly given as well as those incorrectly not given), goals that were incorrectly disallowed (either by an errant offside or a nonexistent foul in the build-up) and deflected goals.

For the three categories of incident related to officiating errors, a panel that included qualified referees made the determination. There had to be consensus for the incident to be considered an error. The panel made a judgement call with regard to the deflected goal: only shots where the deflection played a key role, either in redirecting the ball on target or in misdirecting the keeper were considered.