A year after the French men's national team won the World Cup in Russia, veteran defender Wendie Renard looks to lead the women's side to similar glory on home soil. Born in Martinique, a French island in the Caribbean, the 6-foot-2 star left home at 16 to pursue her dream of playing for the national team. She recently spoke to ESPN about her improbable journey. 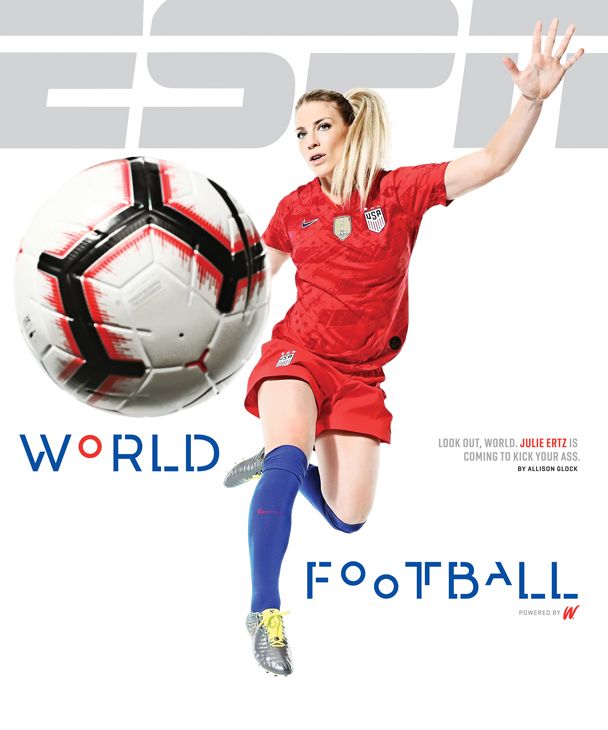 For more on the U.S. and global stars of the upcoming 2019 Women's World Cup, check out the June issue of ESPN The Magazine.

• Which Aussie rules football? It's the unstoppable Sam Kerr

• Julie Ertz is the ass kicker of the U.S. women's national team

Since I was very small, I always said to my mother, "I want to wear the French national team jersey." Even in school, when they asked us what we wanted to be, I wrote, "A professional footballer." The blue jersey is important to us, to me, to my family. Every time we hear the anthem, we feel it.

The women in my family had a passion for football, and that was very rare at the time. We found ourselves among the boys, and you had to see things more quickly and take the initiative to earn respect. They're stronger, so you have to get tougher on the pitch.

When I lost my father at 8 years old, something happened in my head. I told myself, "Maman and Papa won't always be there, so if you see an opportunity, you have to seize it." When you grow up in Martinique, you're not followed as closely and regularly as a young player here, so when you get a chance at a tryout, you have to prove yourself four times more. I had only one thing in my mind: success. You don't think about the dangers or what would happen if you fail.

-- Who will rule the Women's World Cup?

-- How France became the biggest threat to the U.S. this Women's World Cup

With hindsight, I see how lucky I was. My mother wasn't with me when I left home at 16 because it wasn't financially possible, and she was sending me to be with people she didn't know at all. Now she tells me she really suffered when I went away.

The [national team] tryout [in 2006] at Clairefontaine didn't go well. I landed at Olympique Lyonnais thanks to [former coach] Farid Benstiti. After watching me in training for 20 minutes, he said, "I'm keeping her. She's going to learn and progress." Farid treated me like his daughter but always respectfully and professionally. He never gave me anything for free.

During those early days in Lyon, I didn't understand why people made fun of me. A basketball player [also from the French Caribbean] told me, "They're making fun of our accent." And everyone around me was shorter -- just like now -- and there were a lot of comments about it: How am I going to guard her? Or, I don't want to be next to her, she's too big. When you're young, you don't understand how this can hurt. If I hadn't been so mentally tough, if I hadn't known what I wanted, I might have been deterred. As far as my accent, they can make fun of it if they want. It's mine; I own it. When I get irritated, my roots come back very, very quickly and the accent comes back with them. I think it's beautiful. I'm proud of my roots.

When you're from the Antilles, or of African descent, you're often stereotyped as nonchalant, and it's true my body language might have seemed that way sometimes. Every year, I had to work twice as hard to show that I belonged here. Every year, the coach would recruit other players at my position, but the more competition I had, the more I wanted to prove I should be playing. And that way you make it easier for those who come after you. The more I do and the better it goes, they might not shy away from sending scouts to Martinique.

I've dreamed about winning the World Cup since I was tiny. I've lived for it. What the men did last summer was magnificent. I get goose bumps watching the replays. I have lived those moments with Lyon but not quite with our national team. We've had some great moments, but it's not enough. When you get to that moment of truth, you have to be present. The highest level is unforgiving, and at times in the big tournaments we've lacked ferocity in front of the net, we've lacked efficiency, and sometimes we haven't had luck. When that happens, it's because you're missing something. In the 2016 Olympic [quarterfinals], when we played Canada, we had so many chances and to get scored on ... it's cruel. To get back up, you have to be tough.

We have to win a medal or the title [at the World Cup]. That alone will help accelerate women's sport in France. When you win, it's easier to make people want to keep following women's soccer, or to introduce them to it. It would be a big dose of oxygen. We can sense something building. And, by the way, my mother is coming this summer. There was never any question about that!