Over the past 20-plus years, I have seen some of the best girls' high school basketball prospects develop from highly touted recruits into college and WNBA stars. And for every women's basketball recruit I've accurately scouted, there have been a few I've missed on as well.

From a small town in rural Georgia to across the Atlantic Ocean in Germany, many recruits have exceeded expectations. And it's fair to say Geno Auriemma knows how to recruit.

Here are the three best prospects I have ever seen, three I undervalued and three who have yet to reach their potential.

The first time I saw Stewart was at Syracuse's elite camp when she was a rising sophomore. She had a consistent midrange jumper, solid form and excellent technique. What she had in her skill set then, she also has now.

Stewart was a very talented player to begin with. Her ability alone was enough to carry Cicero-North Syracuse High School to a solid season. But her junior year, she became much more confident on the court, and that poise helped Stewart take her game to another level and to dominate.

Moore was a model of consistency at Collins Hill High School in Suwanee, Georgia. She was the ultimate player, someone who was great at executing in the half court, distributing the ball and making shots. And when she would face the toughest opponents, she wouldn't back down.

What has she done since? Just win two NCAA titles with the Huskies, four WNBA championships with the Minnesota Lynx and one MVP award to cement herself among the best players in league history.

We know about DeShields' athletic background. Her father played with five teams in a 13-year MLB career. Her brother is entering his sixth season in the majors. And she has a younger sister, Denim DeShields, who is ranked No. 91 in the espnW HoopGurlz Class of 2021. No offense to Denim, but Diamond might be the most skilled basketball player in the family.

Diamond had a Jordan-esque explosiveness when she would rise over defenders on jump shots. When she was with the Georgia Ice on the AAU circuit, a team that also featured Lexie Brown and Kaela Davis, DeShields was one of the smoothest players on the court and also one of the most dominant. Any time her team needed to make a clutch play, DeShields wouldn't shy away from the moment.

She spent one year at North Carolina and two with Tennessee before she was picked third in the 2018 WNBA draft. DeShields has proven to be one of the league's most promising young players already. She led the Chicago Sky with 16.2 points per game last season and won the WNBA All-Star skills challenge as well.

I was not able to evaluate Sabally in person when she was living in Germany, but the video I saw showed she was impressive. Still, while I knew Oregon's staff was high on her, I tried to be cautious with my ranking.

Sabally might be the ultimate hybrid 4. At 6-foot-4, she has great size, but she can also attack inside, stretch out the defense and shoot from beyond the arc. Her skill set is reminiscent of a Candace Parker or an Emma Meesseman.

Sabally averaged 16.2 points and 6.9 rebounds for Oregon last season before she entered the draft as a junior. The only reason she fell to No. 2 overall was because her teammate, Sabrina Ionescu, went No. 1.

Pitts was a terrific player and a good scorer at the high school level. She could drive to the rim, finish at the line, handle the ball up the floor and hit the 3-pointer. She could have struggled with quickness at the college level, but instead she reformed her game and became one of the most sought-after transfers.

Pitts signed with Minnesota and was the Big Ten Freshman of the Year in 2018. As a sophomore, she averaged 16.3 points and 4.2 rebounds. She left the program this past season and announced her transfer to Texas A&M.

She may not be the explosive player and acrobatic finisher that Chennedy Carter was for the Aggies, but Pitts is a proven scorer who can make an immediate impact in the SEC.

Williams was the 72nd-ranked guard in the Class of 2012. She was fast and could score, but didn't get a ton of exposure being from a small town in South Georgia. She didn't always play against a high level of competition.

Boy, did she prove me wrong.

As a freshman at USF, she had 13 double-figure games off the bench and showed she had an ability to take over. By the time she was a junior, she was averaging over 20 points per game. Now, she's a WNBA All-Star who's averaging double figures against the best players in the world.

Boothe was one of the most amazing high school players I've seen. She once put up 37 points and 22 rebounds against Crystal Dangerfield's high school team. She was also named co-MVP of the McDonald's All-American Game. 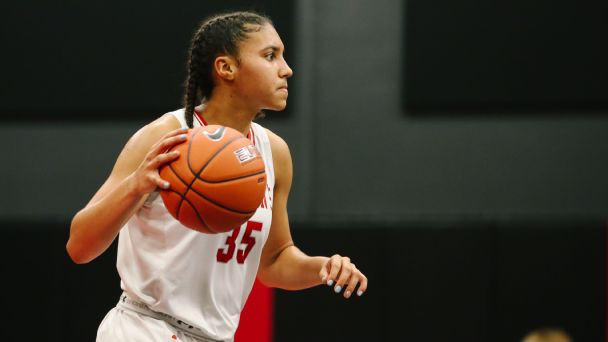 Who are the top girls' high school basketball prospects in the Class of 2021? Top 100 »

She was ranked right behind Megan Walker and Evina Westbrook in the Class of 2017; however, Boothe's career hasn't panned out like I thought it could have.

Boothe committed to Texas but struggled to find playing time and was suspended twice during her freshman season. She transferred to Northwest Florida State College but returned to the Division I level last season with Middle Tennessee State. She missed most of the season while recovering from knee surgery and averaged 6.3 points and 3.6 rebounds in seven games.

Kakala was a power post player from Northern California who signed with Louisville. Ranked 25th overall in the Class of 2017, she was the second-ranked post player behind USC's Ayanna Clark. While she had nimble footwork and a good ability to knock down an elbow jumper, most of her work was done in the post.

Unfortunately, her career has been relatively disappointing. She played in four games with the Cardinals before redshirting and ultimately transferring to Pacific. Kakala sat out the 2018-19 season due to NCAA transfer rules and averaged 4.6 points in 16 games off the bench this past season.

A Stanford commit, Brown was the second-ranked point guard in the Class of 2018 and the 18th-ranked prospect overall. With The Lovett School, she showed she could control the game, knock down 3-pointers and thread the needle with precise passes. She was a McDonald's All-American and a Jordan Brand Classic All American.

Brown averaged 1.6 points per game as a freshman and 2.0 points as a sophomore, but this isn't a knock on her as much as it is a testament to the Cardinal's depth in the backcourt.